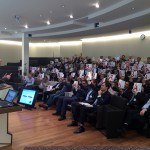 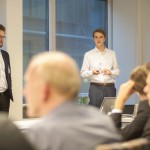 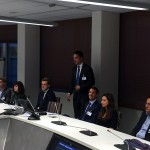 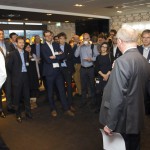 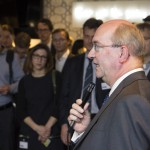 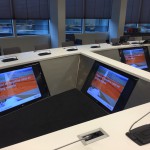 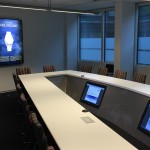 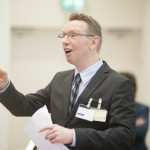 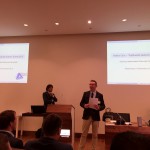 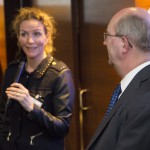 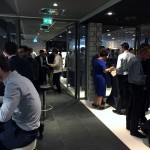 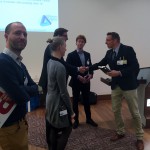 On November 18, 2015, the 2015 TopQuants Autumn Event took place at De Nederlandsche Bank (DNB), the Dutch central bank, who were so kind to host it at their headquarters in Amsterdam. We witnessed another record-breaking event, attracting over 160 quant professionals, who arrived to Amsterdam not only from within the Netherlands, but also from other destinations in Europe. This proves an increasing significance of events organised by TopQuants, but also shows that our organization has earned recognition outside the Netherlands.

The agenda was similar to all previous Autumn Events organised by TopQuants: two rounds with six parallel sessions, each with a seating capacity of approximately 30 attendants per session. Every year the range of covered topics is becoming wider, this time the discussed problems ranged from credit and liquidity risk analysis, valuation adjustments, the impact of negative rates, modelling of the commodity prices, asset-backed trading in energy markets to risk management through open source and web technologies.

A welcome speech, on behalf of TopQuants, was given by Marieke van der Klip, who briefly outlined the goal and the history of the organisation and also expressed gratitude to DNB for being so kind to host the event. This was followed by a warm speech by Jan Sijbrand, Executive Director and Chairman for Prudential Supervision at the DNB. He was happy to see so many professionals present at the event, and emphasised his attachment to the quant society – he also holds a PhD in mathematics. He pointed out the importance of technical and mathematical skills in the financial industry these days.

Kees de Graaf (UvA) and Sarunas Simaitis (Right Random Decisions) gave a presentation on Smile and default: the role of stochastic volatility and interest rates in counterparty credit risk. They outlined the challenges of calculating Credit Value Adjustments (CVA) and Counterparty Credit Risk (CCR). The authors used Finite Difference Monte Carlo as a fast and accurate method to compute risk measures such as Expected Exposure (EE), Expected Positive Exposure (EPE) or Credit Value Adjustment (CVA). The response of the audience after the presentation was very enthusiastic and was followed by a lively discussion.

The presentation from EY by Diederik Fokkema was a discussion on the results of a survey amongst eleven banks on the application of xVA for x in {C,D,F,L,K,M,X, etc.} and the results obtained by Guusje Delsing, Nathan Meibergen (winner of the 2015 edition of the Best Quant Finance Thesis Award) and Jan Willem Timmer in their Master’s theses. All three (former) students dealt to some extent with CVA and DVA, both of which are valuation adjustments to take into account the default of either of the two involved parties within a bilateral derivative contact.

Veronica Malafaia (ING) gave an overview on the impact of negative interest rates on derivatives pricing models. She explained that many interest rate models are based on lognormal dynamics, which prove to be less useful in the negative rates environment. Veronica pointed out that banks’ models need to be ready for negative rates. The so-called displaced diffusion approaches are on important step in this direction. She made an important remark that “simple truths” does not hold any longer in negative rate scenarios and hence the users of models must critically question their intuition.

Rob Sperna Weiland (UvA) talked about Liquidity Risk in the Sovereign Credit Default Swap. Rob was the winner of 2014 edition of Best Quant Finance Thesis Award and this time again he made an excellent impression on the TopQuants’ audience. He noted that the Euro crisis has put the default risk of sovereigns into a new perspective. Nevertheless, historical sovereign defaults are still too scarce to allow for any meaningful statistical back-test or quantitative model development. The crisis not only resulted in increased default risk, also liquidity in sovereign debt became much more relevant. In his research Rob exploited CDS spread data to provide a benchmark for banks’ estimated for their sovereign risk estimates.

There were two presentations from DNB. Ryan van Lamoen gave a speech on Testing for bubbles in asset prices: evidence from QE and other applications. He focused on testing for bubbles in asset prices and the implementation of monitoring tools, which are of great importance for policy purposes. He proposed an alternative test to identify explosive price behaviour and the corresponding episodes in which they occur. He put special emphasis on the impact of Quantitative Easing in the Eurosystem on equity prices and government bonds, since there is a possibility that this unconventional monetary policy may drive equity prices and government bond yields further away from their fundamental drivers. The talk by Pieter van Zwol concerned the main challenges of the current approach for measuring counterparty credit risk exposures (SA-CCR), which will be effective by January 2017. During the presentation he analysed the differences with the new SA-CCR using example derivative portfolios.

Gerben de Zwart (APG) and Johan Duyvesteyn (Robeco) conducted an empirical analysis of the term structure in the volatility risk premium in the fixed income market by constructing long-short combinations of two at-the-money straddles for the four major swaption markets (USD, JPY, EUR and GBP). Their findings indicate that both delta-vega and delta-gamma neutral straddle combinations earn positive returns that seem uncorrelated, suggesting that the term structure is affected by both jump risk and volatility risk. They showed evidence that these results are robust for macroeconomic announcements and the specific model choice to estimate the risk exposures for hedging.

Lech Grzelak (Rabobank) gave a more technical, yet very interesting presentation on Arbitrage –free volatility parameterizations with stochastic collocation. He argued that with a large number of market volatility quotes, it is natural to express them in terms of a parametric form so that the whole range of strikes can be explained by only a few parameters. For several years a market standard for volatility parametrisation has been the well-known Hagan formula – the so-called SABR model, which is very easy to implement through expansion formulae. The approximations themselves unfortunately can lead to densities that are not arbitrage-free – especially for very low strikes they can become negative. The speaker introduced a technique to determine an arbitrage-free density implied by Hagan’s formula using the stochastic collocation method. The principle is to determine a few collocation points on the implied survival distribution function and project them on a polynomial of an arbitrage-free, Gaussian, variable. The proposed method proves to be very fast and straightforward to implement as it only involves 1D Lagrange interpolation and inversion of a linear system of equations. The presentation was very interactive, given its technical character the attendants posed multiple questions, which were later very thoroughly addressed by the presenter.

In his talk Bert-Jan Nauta (RBS) went beyond the by now common approach to Funding Valuation Adjustments (FVAs). In his view funding needs to depend on the liquidity of the position that needs to be funded. He presented a model which allows to relate the funding required for a certain position to its liquidity. In this context, liquidity risk is to be understood as the risk for an event to occur which forces a bank to liquidate some of its assets. If such a liquidity stress event occurs, the bank cannot simply roll over its funding any more. Under certain assumptions about the distribution of stress events, the presenter’s model gives an optimal funding strategy for assets of various liquidity levels. It can thus be applied to motivate a reasonable (read cost efficient) compromise in between the extreme cases of overnight funding and full term funding of positions.

Steffen Pang (Zanders) and Mitchell Ponder (Zanders, VU) explained that corporates focus on the stability of monthly, quarterly or (semi-)annual cash flows. A key risk is formed by price volatility of commodities. This talk presented an econometric model to capture this risk, which neatly integrated several quantitative techniques ranging from Principal Component Analysis, a Kalman filter to GARCH. Volatility in commodity prices form a key risk in Financial Risk Management of Corporate Risk Management. Therefore, the presented model provided fundamental insight in the commodity price risk a corporate is facing.

In his talk on Using open data and open source for next generation of risk models Philippos Papadopoulos (OpenRisk) focused on two different aspects, i.e. data types (and data representation) and application of open source code to risk management. Philippos gave an introduction about some well-known data formats such as CSV, XML and JSON, illustrating their advantages and disadvantages. Then he gave some insight on data standards, highlighting how lack of them is probably the biggest data related issue in finance: in fact, lack of standardisation is what creates the majority of the data issues in finance. Data formats that allow to deal with big amounts of data already exist (i.e., XML – very powerful, even if it is difficult to work with it). In fact, different data standards are used depending on the purpose (i.e., XBRL for financial reporting and SDMX for historical time series). Then the presenter explained the idea behind REST API, which allows each user to retrieve data necessary from specific URLs in different formats according to users’ preferences. He provided a description of what it is meant by model; this involves three parts: (i) abstract model, (ii) source code and (iii) model instance. The idea is to have all these three components linked to URLs accessible to users. The only difference between (i), (ii) and (iii) is that while (i) and (ii) are static metadata, it is possible to send queries to (iii) in order to retrieve documentation, code, etc. An example of this was given by the OpenRisk Dashboard. It allows to retrieve statistical data from the ECB warehouse, to visualise it and to use it within risk models.

After all parallel sessions were finished the participants of the event were invited to attend a math quiz organised by the Dutch Mathematics Olympiad. Quintijn Puite (Wiskunde Olympiade) explained the rules and hosted the quiz. Everyone was given two sheets with letters A and B printed on them, which had to be used to give the correct answer. For every question the available time was 20 seconds. When the time was over, everyone still in the game had to raise their voting sign in the air. If the answer was incorrect the voting sign had to be returned. The riddles touched upon topics such as calendars, expansions, pets, odometers and ski lifts. Everyone had a lot of fun and the four remaining contenders were awarded with gifts sponsored by the Dutch Mathematical Olympiad.

The lively event was concluded by drinks and snacks sponsored by the event host. TopQuants are thankful to the DNB for sponsoring and hosting the event. We appreciate all efforts by the speakers and the quant audience for making this another successful TopQuants event.