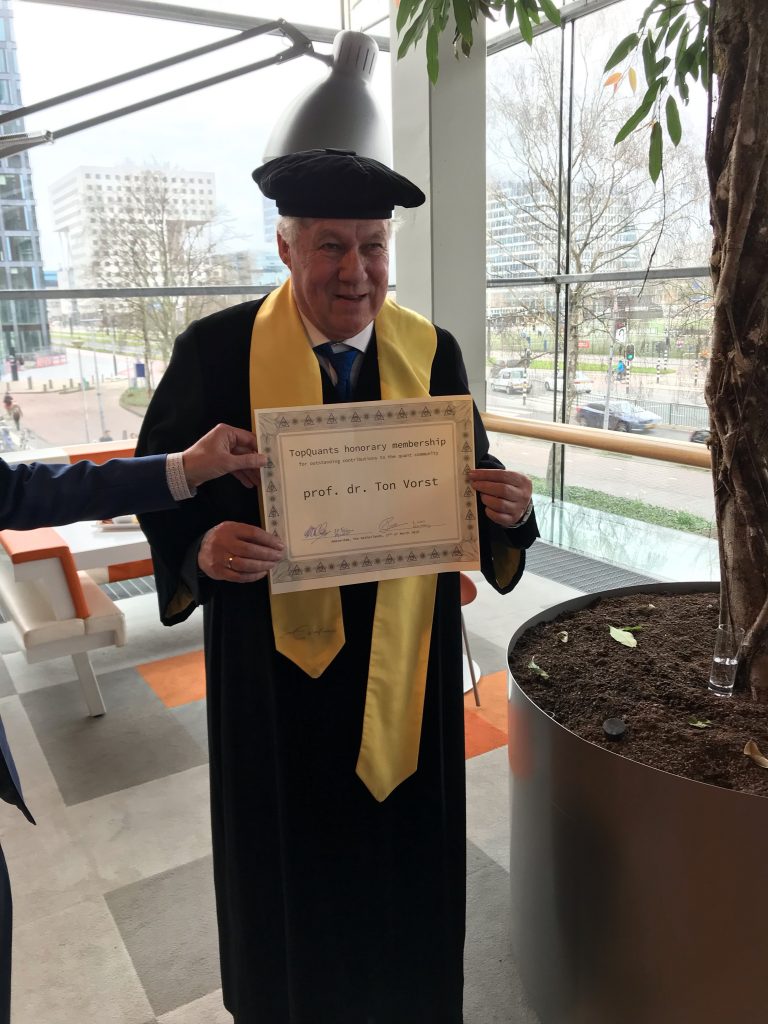 How long have you been a quant? 5 years, 10, or even over 20? Were you already working in the financial industry in 2008 to witness the credit crunch? Where were you when LTCM defaulted in 1998? And did you witness the volatility smile appearing in the Equity option markets after the stock market crash of 1987?

Chances are high that you have only read about some of these in your text books. However, when these events took place, some quant professionals were already in the field. Ton Vorst is one of them. On 28 March 2019, Ton gave his farewell lecture entitled “Finance: Theory and Practice” at the VU Amsterdam, where he had been professor of Quantitative Risk Management for several years. Over the past four decades, Ton has made important contributions to research and also worked in several financial institutions. He could thus generously sprinkle his valedictory lecture, as it is called in the Dutch academic jargon, with personal recollections of historic events.

The audience numbered well over a hundred and consisted of academic colleagues, industry professionals as well as relatives of Ton. The ceremony followed the Dutch university traditions for such lectures, with the professors entering the auditorium in procession-style and wearing the robes indicating the institutions they are affiliated with – already an experience in itself especially for the expats unfamiliar with the Dutch decorum.

Most quants know Ton Vorst for his seminal work on the pricing of Asian options in 1990 and 1992. Fewer know that Ton received his PhD in 1978 for a thesis on algebra, a pure mathematics topic. He then moved into econometric research and quantitative finance at the Erasmus University Rotterdam. At the time of the 1987 stock market crash, he coincidentally happened to be on a research grant at Goldman Sachs – excellent timing to gain relevant industry experience. In 1989 he was appointed as Professor in Finance.

From the year 2000 onwards, Ton was working at ABN AMRO. In 2008, when the bank was taken over by the three consortium banks, he was heading a team of approximately 80 quants working on a range of topics from quantitative consultancy to validation. The department was dissolved in the wake of the takeover, Ton moved to RBS, but would stay there only for a few years. In 2009, a handful of former ABN AMRO colleagues, many now working at other companies, met at an informal reunion. They reminisced about the inspiring atmosphere and the professional cooperation in their former team, and decided to found TopQuants – but that’s another story…

Ton continued to work at the VU, where he had moved in 2006, shaping its Master programmes on mathematical finance, teaching and supervising students. As these Master programmes are quite popular with non-Dutch students, many of which after their graduation pursue at least parts of their career in the Netherlands, quite a few quants working in this country are connected with Ton in one way or the other.

As Ton emphasised in his farewell lecture, his ambition has always been to propose models or explanations that are mathematically self-consistent and of practical relevance. He illustrated this with an example from the theory of Private Equity funds. Some of his academic colleagues were, on theoretical grounds (moral hazard or adverse selection), convinced that investments that the fund shares with other investors should bear lower returns, but no matter how hard they tried failed to find convincing empirical evidence for their hypothesis. Ton, in turn, argued that taking into account  diversification requirements typical for hedge funds, and the resulting effective cap on the size of individual investments, would allow to explain the empirical observations without the need to make complex model assumptions.

Teaching at the VU, Ton also emphasised the need to apply mathematical and statistical tools with care, and critically reflect on the practical relevance of findings before drawing conclusions. As this can be challenging even for researchers and industry practitioners with several years of experience, it is perhaps not surprising that students can sometimes go astray. When giving examples of such student naivety in his farewell lecture, Ton could at times sound somewhat disappointed and even grumpy – his younger colleagues at the faculty might formulate it in a more Triple P for quants way: mathematical Precision, Plausibility check and Practical relevance.

Of course, content-wise this resonates very well with the TopQuants ideals. Roger Lord and Diederik Fokkema attended the ceremony as representatives of the networking organisation. They presented Ton with an honorary TopQuants membership for his outstanding contributions to the quant community. We hope to welcome our honorary member soon to our upcoming events!