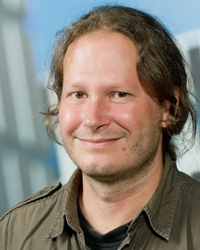 Diego Garlaschelli is Assistant Professor at the Lorentz Institute for Theoretical Physics, Leiden University, since 2011 and Associate Fellow of the Saïd Business School, Oxford University, since 2010. In 2013 he obtained the Italian qualification as Associate Professor in Theoretical Physics and in Applied Physics. In Leiden he leads a research group with strongly interdisciplinary interests, including network theory, economic complexity, social dynamics, statistical physics and graph theory. He teaches courses in Complex Networks and Econophysics at the Faculty of Sciences in Leiden. He holds a master degree in theoretical physics from the University of Rome III (2001) and a PhD in Physics from the University of Siena (2005). Before moving to Leiden, he held postdoctoral positions at the Australian National University in Canberra (Australia), the University of Siena (Italy), the University of Oxford (UK) and the S. Anna School for Advanced Studies in Pisa (Italy).